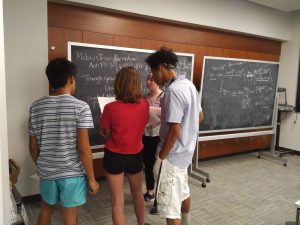 “PUNDiT: (P)racticum for (Und)ergraduates (i)n Number (T)heory” is a 2-day intensive program which will showcase number theory broadly interpreted at the introductory level.  A goal of this program is to expose Southern California students traditionally underrepresented in number theory (such as women and underrepresented minorities) to the beauty of the subject.

The Practicum is introductory in nature and no prior number theory coursework will be assumed.  Students should be familiar with Calculus and Linear Algebra, although this is not required.  The Practicum is designed for students who have completed minimal coursework in upper-division mathematics courses.

PUNDiT will take place on Saturday October 16 and Sunday October 17 at IPAM in UCLA, and will feature four types of events:

• Tutorial: Two faculty members will rotate to give three lectures over two days to introduce Riemann Surfaces.
• Problem Sessions: Two graduate students will coordinate a series of three hour-long group-work sessions where students will work on problems meant to supplement the tutorials.
• Expository Talks: Four experts in number theory will give one-hour introductory presentations on various topics.
• Panel Discussions: There will be panels on “Opportunities in Number Theory for Undergraduates” and “Opportunities at the NSF-Math Institutes for Undergraduates”.

In 1602, Galileo Galilei became interested in studying the motion of a swinging lamp at a church in Pisa. His studies, along with the invention of the Integral Calculus, led to the introduction of elliptic integrals. In 1718, Count Giulio Fagnano found a curious “duplication formula” by considering a point on a curve called the lemniscate (“pendant ribbon”). These results were subsequently generalized by Leonhard Euler in 1728 to a larger set of curves. Eventually this led to a theory of “elliptic curves”. In this presentation, we give the history and genesis of the subject, culminating with the result that the set of complex points on an elliptic curve form a torus.

In our third tutorial we continue to sketch the deformation theory of Riemann surfaces by means of goodwill and example, and lots of pictures. Our examples illustrate that algebraic objects can be geometric, and geometric objects can be number theoretic! We pursue some surprisingly beautiful low-hanging fruit of these correspondences (and point to some staggering summits) which we consider collectively as “Jabberwocky.” | The notion of Jabberwocky is anecdotal of course, but in a sense described by David Blackwell, apropos of our meeting here at PUNDiT! Ultimately, we understand the parametrization spaces of geometric structures on Riemann surfaces as being contained in certain algebro-geometric-analytic objects known as character varieties. Our examples

Panel Discussion: Opportunities in Number Theory for Undergraduates
Would you like to continue learning more about topics in algebraic geometry and number theory? What are some next steps available to undergraduates? In this panel, we introduce some opportunities which are well-suited for participants of PUNDiT. We will have representatives from Arizona Winter School (AWS, http://www.math.arizona.edu/~swc/) in Phoenix, AZ; Pomona Research in Mathematics Experience (PRiME, http://research.pomona.edu/prime) in Claremont, CA; and the Research Experience for Undergraduates at the University of Virginia (REU@UVA, https://uva.theopenscholar.com/reu/program) in Charlottesville, VA; and the Virtual Math Seminar on Open Conjectures in Number Theory and Arithmetic Geometry (VaNTAGe, https://sites.google.com/view/vantageseminar).

Panel Discussion: Opportunities at the NSF-Math Institutes for Undergraduates
The Mathematical Sciences Institutes (https://mathinstitutes.org) are comprised of seven U.S.-based institutes that receive funding from the National Science Foundation(NSF), an independent U.S. government agency that supports research and education in all non-medical fields of science and engineering. The Math Institutes aim to advance research in the mathematical sciences, increase the impact of the mathematical sciences in other disciplines, and expand the talent base engaged in mathematical research in the United States. But how can these Institutes benefit me as an undergraduate?

In this panel, we present several opportunities which are available to students during the summers. Many of the institutes offer programs in the form of paid internships and research experiences for undergraduates (REUs). We will have representatives from the Mathematical Sciences Research Institute’s Undergraduate Program (MSRI-UP, http://msri.org/up) in Berkeley, CA; Research in Industrial Projects for Students (RIPS, http://www.ipam.ucla.edu/rips) at IPAM in Los Angeles, CA; Summer@ICERM at the Institute for Computational & Experimental Research in Mathematics in Providence, RI; and the Undergraduate Summer School (USS, https://icerm.brown.edu/summerug/) as part of the Park City Math Institute (PCMI, https://pcmi.ias.edu/upcoming) in Park City, UT.