Summary Report of the Workshop on Future Directions in Mathematics 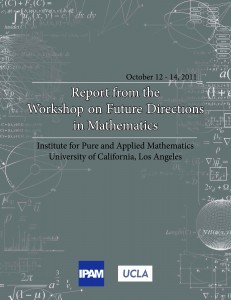 This report summarizes the Workshop on Future Directions in Mathematics, sponsored by the Office of the Assistant Secretary of Defense for Research and Engineering (ASD(R&E)), Basic Science Office. The workshop was held at the Institute for Pure and Applied Mathematics (IPAM) at UCLA on October 12-14, 2011. It involved 23 invited scientists and 4 government observers.  Read the full report.

The goals of the workshop were to provide input to the ASD(R&E) on the current state of mathematics research, the most promising directions for future research in mathematics, the infrastructure needed to support that future research, and a comparison of mathematics in the US and in the rest of the world. These goals were articulated through a set of six questions, listed in Appendix II, that were sent to the participants prior to the workshop.

The participants agreed that the main body of the report should consist of 5 sections:

The participants identified important accomplishments over the last decade in 7 areas of mathematics:

The participants expect to see great progress over the next decade in 7 areas of mathematics: