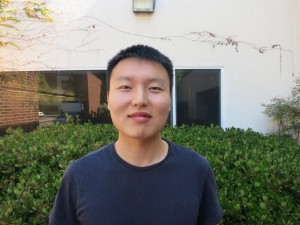 Jason Xu is a postdoctoral research fellow in the Department of Biomathematics at UCLA primarily interested in developing statistical methods for non-convex optimization problems.  He participated in IPAM’s summer research program for students, RIPS, as a student in 2012 and as an academic mentor in 2017.  He completed his PhD in statistics in 2016 at the University of Washington.

What do you consider yourself: a mathematician, a physicist, an engineer…?

First, a statistician, but also a mathematician.

I started my undergraduate studies at University of Arizona as an economics major. And while I had always enjoyed problem solving, it was while I was taking a class on linear algebra that I discovered that math was more than just problem solving; I was truly fascinating by proofs and decided to change my major to math encouraged by Professor Velez, the instructor of the course.

You have participated in Research in Industrial Projects for Students (RIPS) as a student and as an academic mentor; can you describe your roles, and what you enjoyed about them?

As a student, I really enjoyed the team work experience and being surrounded by so many hard working and motivated students. Working with three other like-minded hard working students on a problem proposed by an industrial sponsor who needs to find a solution was a new experience and a great opportunity as an undergraduate student. Participating in the program also allowed me to appreciate research as a career job and not as an occasional activity or an obsession to solve a problem.

As an academic mentor, I enjoyed the challenge of having to balance guiding students through their research project while not getting fully involved in finding a solution for the proposed problem.

Could you describe your RIPS projects and what you found most interesting about them?

As a student, I was part of the Aerospace team, and we were given the task of optimizing the operation of steerable satellite sensors. It was a great project where geometry played a fundamental role in optimization. I learned a lot about elliptical geometry, and it helped me appreciate real life applications.

As an academic mentor, I supervised the project proposed by LAPD, which aimed at developing an algorithm to detect and isolate from audio recordings of police activity situations in which the interaction between police officers and the public may lead to a confrontation. The project description suggested possible directions to tackle the problem, but it was an open ended project where students were encouraged to think beyond the proposal and seek their own path to the solution. The challenge to find appropriate machine learning algorithms that could be combined with signal processing techniques was the most interesting part of the project to me.

How has your participation in RIPS (and other IPAM programs) contributed to your progress as a graduate student and as a postdoctoral scholar?

As a student, RIPS introduced me to applications and expose me to work on a team composed of people from diverse backgrounds and disciplines. And as a mentor, I feel I’ve gained valuable experience that will surely help me in the future when advising graduate students with diverse background.

I also participated in the tutorials for the long program “Understanding Many-Particle Systems with Machine Learning” which exposed me to quantum chemistry and new domains of applications.

What problems are you excited about now?

I am primarily interested in new directions in statistics motivated by mathematical problems. In particular, I am interested in statistical methods for non-convex optimization problems. Many of these problems were intractable until recently; however, the joint efforts of statisticians and mathematicians that combine modern optimization techniques such as proximal algorithms and splitting methods with classical statistical methods are making these problems more tractable and allowing for new applications.

What is your favorite paper or idea of yours?

I really like a recent idea of mine to combine spectral techniques with compressed sensing in order to characterize the finite time behavior of stochastic processes. This technique, unexpectedly, combines several of my interests and help solve complex problems such as computing transition probabilities of complex branching processes.