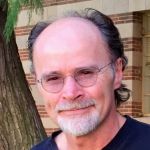 Michael Jolly is a professor in the Department of Mathematics at Indiana University, working on turbulence. We caught up with him during the IPAM long program, Mathematics of Turbulence.

How did you get into it?

Back in 7th grade, I enjoyed helping the other students in math class.  I was in a blue-collar junior high, so the material was pretty modest and I was behind when I went to college.  I started college as a math major who had never had calculus, and it was tough.

So I was a math major.  But I started to have second thoughts.  Even though it came easy to me in 7th grade, I started to wonder if math was really my calling.  I had a friend who was studying architecture and I thought “gee, that sounds intriguing.”  I talked to an advisor about maybe getting a dual degree in math and architecture.  He told me two things: first of all, to be a successful architect, you have to be a bit of a businessman, which I’m not.  Second, he told me that it isn’t helpful to accumulate different degrees, and that you really should pick something.  At that point I decided to focus on mathematics.

This is your first time at IPAM, and you jumped in with both feet by organizing the long program Mathematics of Turbulence.  How did that happen?

Charlie Doering invited me to be an organizer, and I was happy to accept.  While it was great to bring in a lot of mathematicians to the first workshop, having a large number of long term participants from other fields has allowed a core group to get to know each other and learn from each other.  That is difficult to do during an intense week of workshop talks.

Who has been a good mentor for you or who has really helped you?

I was helped a lot by a remarkable graduate student.  While I was working on my PhD, the mathematics department had a joint seminar with the chemical engineering department, where I met Yannis Kevrekidis, who was finishing his PhD in ChemE.  Somehow I started working with him doing some computing, and I thought maybe I was wasting my time, but the following summer he invited me to work with him at Los Alamos where he was a postdoc.  That was a very good experience for me.  It was there that I first felt like I could find a niche in this business.   Yannis brought me to Princeton as his postdoc.  We started then to work with Edriss Titi, who has also helped me throughout my career.

My main influence, however, has been Ciprian Foias.  He introduced me to the mathematical analysis of turbulence, and has generously included me in his effort to establish the laws governing energy at various length scales directly from the Navier-Stokes equations.

How has the IPAM program influenced your research and career?

The perspectives from geophysics and engineering have broadened my view of turbulence.  The experts from those fields at our IPAM program know a lot of mathematics so they can both humor us when we discuss our problems and explain their own in terms we can understand.  In our working group on data assimilation Tom Bewley has been teaching us about ensemble methods, something I had not seen before, but am now comparing to our own approach.

This has also given me a chance to learn from people who are experts with modern computational resources.  Annick Pouquet has graciously shared her hydrodynamic code from NCAR, and David Goluskin has trained a number of us in NEK5000, which sounds like the latest broom from Harry Potter, but is a useful code developed at Argonne.  These codes are allowing me to go beyond what my 2D Navier-Stokes code can do.

What would you tell young people who are considering coming to an IPAM program?

My hope is that the experience of young people at IPAM is like what I had at Los Alamos.  When you take people out of their home institution, the lines between junior and senior people can be blurred somewhat, which can encourage young people to contribute.

You can read more about his work on his webpage.