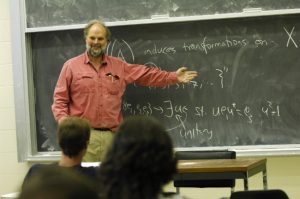 IPAM mourns the death of colleague and friend, Vaughan Jones, Stevenson Chair and Distinguished Professor of Mathematics at Vanderbilt University. Considered one of the world’s foremost mathematicians, Jones’ teaching career began at UCLA in 1980 before moving on to teach at the University of Pennsylvania and subsequently being appointed Professor of Mathematics at UC Berkeley in 1985, ahead of his eventual move to Vanderbilt in 2011. Jones’ areas of expertise included von Neumann algebra theory, subfactors and planar algebras, mathematical physics, and low-dimensional topology with a focus on knot theory. Jones participated in many IPAM events, including having been a core participant and Green Family Lecture Series lecturer as part of IPAM’s 2018 long program on Quantitative Linear Algebra. Amongst his many accomplishments, in 1990 Jones was awarded the Fields Medal for finding a new mathematical expression, now known as the Jones polynomial, that distinguished between different types of knots as well as links in three-dimensional space—a discovery that had been missed by topologists for the previous 60 years. Dr. Jones will be truly missed.