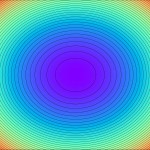 Applications that involve HJ PDEs in a high-dimensional (and possibly infinite-dimensional) setting lead to challenging computational problems. Although a large literature is available on HJ PDEs, many challenges remain both from a mathematical and computational point of view. A lot of interactions have occurred over recent decades between these areas thanks to their connection to HJ PDEs. The subject is currently on the verge of becoming central to many new areas of applications, and progress in tackling Hamilton-Jacobi equations could lead to important advances in several fields. The main goal of this long program is to leverage synergy between different fields to advance mathematical theory and algorithms to solve real-life problems.

The program will open with one week of tutorials, presented by some of the main organizers. These tutorials will provide an introduction to the major themes of the entire program and connect the themes of the four workshops. The goal is to introduce a common language and build a foundation for the participants of this program who have diverse scientific backgrounds.

During the weeks between workshops, participants in residence will develop collaborations; we expect fruitful discussions especially between domain scientists, algorithm developers and pure and applied mathematicians.