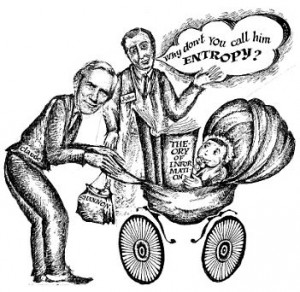 “Figure courtesy of Arieh Ben-Naim, Discover Entropy and the Second Law of Thermodynamics”

The concept of entropy has emerged as a fundamental construct linking diverse areas of mathematics, physics and information theory. The pace at which new connections are being made has quickened in recent decades. Entropy methods have found various applications in the theory of diffusion process. For any diffusion process the question: “How long does it take to reach equilibrium?” is of both theoretical and practical interest. To answer such a question in any generality requires incisive functional inequalities involving some sort of relative entropy. Conversely, diffusion processes have played an important role in proving entropy inequalities. The classic example is Claude Shannon’s Entropy Power Inequality, which was first rigorously proved by Stam using a diffusion (heat equation) argument. The quantum strong subadditivity inequality of Lieb and Ruskai, originally motivated by efforts to study thermodynamic limits, has become a cornerstone of the quantum information theory edifice. This workshop is organized around several related goals.

The first goal is to focus on recent research on convergence to equilibrium and entropy estimates for quantum mechanical systems. Much of this research combines probabilistic methods often combined with optimal mass transport methods, log-Sobolev inequalities and other functional inequalities. A key open problem is to show that every diffusive quantum mechanical system in finite dimension admits fast decay to equilibrium. It is evident from recent research that new ideas and concepts are required to tackle this challenging problem. It appears particularly important to strengthen the geometrical aspects of the problem and to use more physical classical tools such as steepest descent and transport inequalities in a “space without points”.

A second goal of this workshop is to better connect the quantum information community with researchers in high energy physics. In the last decade, the work of scientists including Hawking, Hayden and Preskill on the gravity/guage duality has used entropy as a tool to describe the interaction of the boundary and the bulk in a theory combining gravity and quantum field theory. Finite-dimensional models from quantum information theory, in the form of tensor networks with particular geometries, have been put forward to describe both the gravity/guage duality and black hole physics. Of course, all these threads come together by embedding algebras of observables for bulk and boundary as operators on one common physical Hilbert space, leading to consideration of the type III von Neumann algebras arising in quantum field theory. Quite interestingly, it is again geometrical insight, which appears to explain additional entropy inequalities. Vice versa, monotonicity of relative entropy has a physical meaning in quantum field theory, as explained by Witten.

The ultimate goal of this workshop is to enable both of these research groups to find new grounds for collaboration, and new pathways forward in the development of pure and applied mathematics.