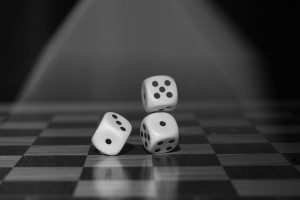 The modeling of complex multiscale phenomena often leads to problems set in random media, since periodicity is very often rather restrictive. The mathematical study then leads to stochastic homogenization and averaging. This setting however, lacks the mathematical structure and estimates available in periodic media and most, if not all, classical PDE methods fail. It becomes necessary to use sophisticated probabilistic methods to overcome difficulties.

In spite of its flexibility, computing nonlinear problems in random media is very expensive. Hence, in practice, it is needed to consider environments which are small random perturbations of periodic ones, and then to obtain some asymptotic expansion for the ergodic constants. Concrete examples of such phenomena that relate to Hamilton-Jacobi equations are large deviations, front propagation and random walks in random media. The latter strengthens the connection with probability.

Another direction where Hamilton-Jacobi connect with stochastics is the study of stochastic PDEs driven by Brownian motions or rough paths. This is an area that has seen considerable growth during the last ten years. It relates to the work on KPZ-type models as well as stochastic viscosity solutions and conservation laws. One of the striking outgrowths of these theories are new and surprising stochastic regularization-type results. A third direction is about small scale limits of deterministic and stochastic discrete models which in the limit give rise to Hamilton-Jacobi type problems. Examples are the Abelian sandpile and peeling processes. Another topic is limits of Kinetic Fokker Planck equations and degenerate elliptic operators. These types of hypoelliptic operators are fundamental models of particle interactions, which have newfound applications in optimization. We will study topics such as effective diffusivity in the Kramers to Smoluchowski limit and rates of convergence to the invariant measure in the degenerate elliptic case.

The workshop will include a poster session; a request for posters will be sent to registered participants in advance of the workshop.