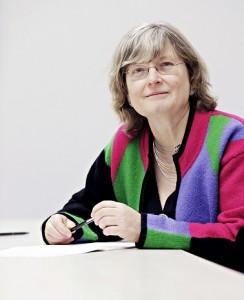 The City University of Hong Kong (CityU) has awarded the prestigious William Benter Prize in Applied Mathematics 2018 to Professor Ingrid Daubechies.  According to CityU’s website, she is “an internationally acclaimed scholar of wavelet theory, who has significantly advanced digital data processing” and “has made exceptional contributions to a wide spectrum of scientific and mathematical subjects, and her work in enabling the mobile smartphone revolution is truly symbolic of the era.”  Professor Daubechies is the first woman to receive this award.  She is currently a James B. Duke Professor of Mathematics and Electrical and Computer Engineering at Duke University, a member of the US National Academy of Sciences, and a member of the US National Academy of Engineering.  Daubechies has been a speaker for several IPAM workshops, an organizer of the Adaptive Data Analysis and Sparsity workshop in 2013, and gave IPAM’s annual Green Family Lecture Series in 2016.

Starting in 2010, the William Benter Prize has been awarded once every two years to those whose mathematical contributions have had a direct and fundamental impact on scientific, business, finance and engineering applications.  Three of the four previous awardees have also organized programs at IPAM.  Congratulations to Ingrid Daubechies on this great achievement!