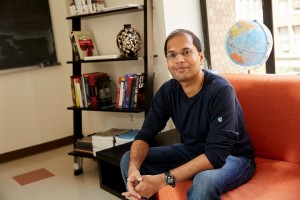 Subhash Khot (New York University) has been named a MacArthur Fellow for his work in providing critical insight into unresolved problems in the field of computational complexity. According to its website, the MacArthur Fellows Program awards unrestricted fellowships to talented individuals who have shown extraordinary originality and dedication in their creative pursuits and a marked capacity for self-direction. In addition to being an organizer and speaker in IPAM’s 2009 workshop on Metric Geometry, Khot also participated in the fourth workshop of the Combinatorics long program in 2009 called “Analytical Methods in Combinatorics, Additive Number Theory and Computer Science.”

Khot received a B.Tech. (1999) from the Indian Institute of Technology, Bombay, and a Ph.D. (2003) from Princeton University. He is currently Silver Professor of Computer Science in the Courant Institute of Mathematical Sciences at New York University.