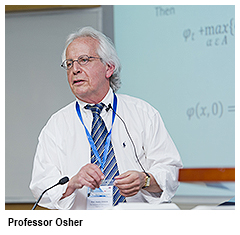 Congratulations to Stan Osher, IPAM’s Director of Special Projects!  According to his Google Scholar Citations public profile, he has been cited a total of 101,012 times since 1989, with an h-index of 109.  The h-index is an author-level metric that measures both the productivity and citation impact of the publications of a scientist or scholar.  Professor Osher is the 2nd most highly cited researcher in the history of UCLA.  The Webometrics Ranking of World Universities by Cybermetrics Lab, published in August 2017, ranks him as 1,579 out of the 2,258 most highly-cited authors in history (h-index of 100 or higher).