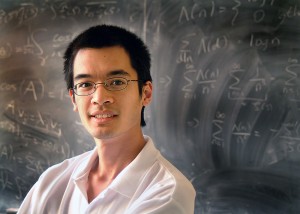 Terence Tao, UCLA professor of mathematics and member of IPAM’s Science Advisory Board, has been selected by President Joe Biden as one of 30 of America’s most-distinguished leaders in science and technology. This recognition entails Dr. Tao to serve on the President’s Council of Advisors on Science and Technology. The Council is the only body of external advisers charged with making policy recommendations to the president on science, technology and innovation to address the pressing challenges facing the nation.

Tao, who holds the James and Carol Collins Chair in the UCLA College, became the first mathematics professor in UCLA history to be awarded the Fields Medal in 2006, often described as the “Nobel Prize in mathematics.” He has earned many other honors, including the National Science Foundation’s Alan T. Waterman Award, the Breakthrough Prize in Mathematics, Royal Society’s 2014 Royal Medal for physical sciences, the Royal Swedish Academy of Sciences’ Crafoord Prize and the first Riemann Prize in Mathematics, established by Italy’s Riemann International School of Mathematics. National Geographic magazine featured him in its “What makes a genius?” May 2017 issue.

In addition to serving on IPAM’s Science Advisory Board, Tao has been a consistent advocate and participant of the institute’s programs. Among many of his contributions, it’s worth highlighting his work as an organizer and speaker at IPAM’s 2018 spring long program Quantitative Linear Algebra and as a speaker at the inaugural conference of the Latinx in the Mathematical Sciences Conference series in 2015.

Congratulations to Terence Tao on this great achievement!

You can find the press release here.