Public Lecture: “The Shape of Inner Space: String Theory and the Geometry of the Universe’s Hidden Dimensions” by S. T. Yau 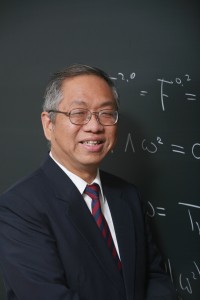 Shing-Tung Yau’s work has impact in both physics and mathematics. Calabi-Yau manifolds are among the ‘standard toolkit’ for string theorists today. His proof of the positive energy theorem in general relativity demonstrated—sixty years after its discovery—that Einstein’s theory is consistent and stable. His proof of the Calabi conjecture allowed physicists—using Calabi-Yau compactification—to show that string theory is a viable candidate for a unified theory of nature. In recognition of his many accomplishments, Yau has also received a number of awards and prizes, including the Fields Medal (1982), a MacArthur Fellowship (1984)  the Crafoord Prize (1994), the U.S. National Medal of Science (1997), and the Wolf Prize in Mathematics (2010). Yau’s book, The Shape of Inner Space: String Theory and the Geometry of the Universe’s Hidden Dimensions, was published earlier this year with co-author Steve Nadis.