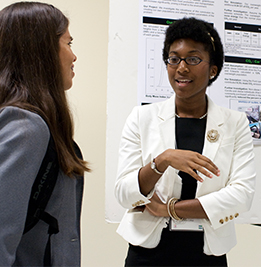 IPAM is honored to host the 2014 Blackwell-Tapia Conference and Awards Ceremony. The conference and prize honors David Blackwell and Richard Tapia (who won the National Medal of Science in 2010), two seminal figures who inspired a generation of African-American, Native American and Latino/Latina students to pursue careers in mathematics. This will be the eighth conference since 2000, held every other year.

The conference will offer a mix of activities including scientific talks, poster presentations, panel discussions, ample opportunities for discussion and interaction, and the awarding of the Blackwell-Tapia Prize. Participants will come from all career stages and will represent institutions of all sizes across the country, including Puerto Rico.

The goals of the conference are:

The National Blackwell-Tapia Committee has selected Jacqueline M. Hughes-Oliver to receive the 2014 Blackwell-Tapia Prize. Hughes-Oliver has been a professor of statistics at North Carolina State University since 1992. She is visiting George Mason University until May 2014. She has made important contributions in a number of statistical research areas including methodological research on prediction and classification, variable and model selection with dimension reduction, design of experiments, and spatial modeling. She has worked passionately on the cause of increasing diversity of individuals working of the statistical and mathematical sciences. Read the press release.