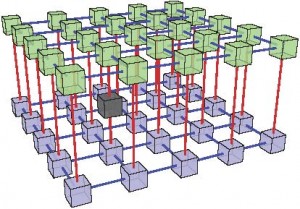 Due to their high complexity, our understanding of strongly correlated quantum many-body systems is still limited. This concerns, for example, both static and dynamical equilibrium properties of fermionic systems and quantum magnets in condensed matter physics, as well as complex molecules with strong entanglement in quantum chemistry. Other big challenges are the analysis of non-equilibrium dynamics of closed systems, systems interacting with an environment, and transport problems. Tensor network states such as MPS, TTN, PEPS, and MERA are designed to capture the structure of entanglement in quantum systems in compressed representations. They are also particularly well-suited for the study of topological ordered phases of matter which cannot be described within the framework of spontaneous symmetry breaking. A better mathematical understanding of approximate tensor network representations is emerging for cycle-free networks like MPS and TTN. Current interesting questions concern, for example, the algorithmic stability and complexity, error accumulation, and the optimal choice of single-particle orbitals. Much less is known about the mathematical properties of formats like PEPS which allow cycles and are very natural physically for (D>1)-dimensional systems. The cycles can lead to mathematically intricate situations where, for example, the set of tensor network states is not closed. A major long-term challenge is to identify formats and algorithms that combine key physical properties of PEPS with the algorithmic robustness of MPS and TTN. In this workshop, we will focus on the interplay between specific applications and theoretical developments. In particular, we will discuss specific challenging applications, new algorithms, and mathematical properties of tensor network state methods for the study of ground states, systems at nonzero temperatures, dynamical response, and non-equilibrium phenomena.