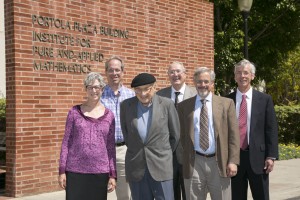 IPAM’s co-founder and former director Mark L. Green and his family established a generous endowment in 2011 to support an annual lecture series at IPAM. In 2017, they made a second gift to expand the series to two per year.  Since 2012, the Green Family Lecture Series has attracted speakers of the highest international stature. Their lectures cover topics of interest to IPAM participants, the university audience and the broader community.

The Green Family Lectures are advertised broadly to the relevant communities. The first talk is meant for the general public. The second “research lecture” is intended for those with a general background in science and math. The third talk is on the lecturer’s current research, and is usually part of an IPAM workshop. The first and second talks are held in a large lecture hall on campus, to accommodate an audience of 200 or more; no RSVP is necessary.  With the lecturer’s permission, we video record the lectures and make them available on IPAM’s website and YouTube Channel.

Cynthia Dwork, is the Gordon McKay Professor of Computer Science at Harvard, Affiliated Faculty at Harvard Law School and Department of Statistics, and Distinguished Scientist at Microsoft, is renowned for placing privacy-preserving data analysis on a mathematically rigorous foundation. She has also made seminal contributions in algorithmic fairness, cryptography, and distributed computing, and is the recipient of numerous awards including the IEEE Hamming Medal and the ACM Paris Kanellakis Theory and Practice Award. Dwork is a member of the US National Academy of Sciences and the US National Academy of Engineering, and is a Fellow of the American Academy of Arts and Sciences and the American Philosophical Society.

Andrea M. Ghez is Professor of Physics & Astronomy and Lauren B. Leichtman & Arthur E. Levine chair in Astrophysics. She is one of the world’s leading experts in observational astrophysics and heads UCLA’s Galactic Center Group. Best known for her ground-breaking work on the center of our Galaxy, which has led to the best evidence to date for the existence of supermassive black holes, she has received numerous honors and awards. In 2020 she became the fourth woman to be awarded the Nobel Prize in Physics, sharing one half of the prize with Reinhard Genzel (the other half was awarded to Roger Penrose). She is the first woman to receive a Crafoord prize in any field, received the Bakerian Medal from the Royal Society of London, a MacArthur Fellowship, and was elected to the National Academy of Sciences, the American Academy of Arts & Sciences, and the American Philosophical Society.

From the Possibility to the Certainty of a Supermassive Black Hole. October 25, 2021

Can We Use Genomics to Better Understand and Treat Cancer? January 27, 2020

Computational Genomic Approaches to the Understanding and Treatment of Cancer. January 28, 2020

Emmanuel Candès is the Barnum-Simons Chair in Mathematics and Statistics and a Professor of Electrical Engineering at Stanford University. He received his PhD in statistics from Stanford in 1998. His research interests include computational harmonic analysis, statistics, information theory, signal processing and mathematical optimization. He has received many awards including the McArthur Fellowship in 2017 and the Alan T. Waterman Award from NSF in 2006.  He is an elected member of the National Academy of Sciences (2014) and of the American Academy of Arts and Sciences (2014). He has given over 60 plenary lectures at major international conferences including the International Congress of Mathematicians (2014).

Barry Barish is a leading expert on gravitational waves. He is the Linde Professor of Physics, Emeritus at Caltech and recently joined the faculty at UC Riverside. At Caltech, Barish was the principal investigator, then director of the Laser Interferometer Gravitational-wave Observatory (LIGO).  He created the LIGO Scientific Collaboration (LSC), which now enables more than 1000 collaborators world-wide to participate in LIGO.  In 2017, Barish was awarded the Nobel Prize in Physics along with Rainer Weiss and Kip Thorne for their contributions to the LIGO detector and the observation of gravitational waves. Barish earned a Ph.D in experimental high energy physics at UC Berkeley in 1962.  His lectures will take place the week of January 28, 2019; details will be announced in December.

From Einstein to Gravitational Waves. January 28, 2019

Yann LeCun is Director of Facebook’s Artificial Intelligence Research and Silver Professor at NYU, affiliated with the Courant Institute and the Center for Data Science. He received a PhD in Computer Science from Université Pierre et Marie Curie (Paris). After a postdoc at the University of Toronto, he joined AT&T Bell Labs, and became head of Image Processing Research at AT&T Labs in 1996. He joined NYU in 2003 and Facebook in 2013. His current interests include AI, machine learning, computer vision, mobile robotics, and computational neuroscience. He has been a member of IPAM’s Science Advisory Board since 2008 and has organized several IPAM programs.

Deep Learning and the Future of Artificial Intelligence. February 5, 2018

God May or May Not Play Dice but He Sure Loves a von Neumann Algebra. May 2, 2018

Edward Witten is a mathematical physicist at the Institute for Advanced Study in Princeton, New Jersey. Witten is a researcher in string theory, quantum gravity, and supersymmetric quantum field theories, and is a leading researcher in superstring theory. In addition to his contributions to physics, Witten’s work has had a significant impact in pure mathematics.  In 1990 he became the first and so far the only physicist to be awarded a Fields Medal by the International Mathematical Union.  He is also a member of the National Academy of Sciences and a recipient of a MacArthur Prize, the Dirac Medal, and other honors.

From Gauge Theory to Khovanov Homology Via Floer Theory. March 6, 2017

Ingrid Daubechies is best known for her breakthroughs in wavelet research, advances in time-frequency analysis, and contributions to digital signal processing. Some of the wavelet bases and other computational techniques she developed were incorporated into the JPEG2000 standard for image compression. Daubechies was the first female full professor of mathematics at Princeton, the first woman to receive the National Academy of Sciences Award in Mathematics, the first woman president of the International Mathematical Union, and she is very likely the first and only mathematician to have been granted the title of Baroness by Belgium’s King Albert II.

The Master’s Hand: Can Image Analysis Detect the Hand of the Master? May 19, 2016

Andrew W. Lo (MIT) has published numerous articles in finance and economics journals, and has authored several books including The Econometrics of Financial Markets, A Non-Random Walk Down Wall Street, and Hedge Funds: An Analytic Perspective.  His awards include an Alfred P. Sloan Foundation Fellowship, a Guggenheim Fellowship, the Paul A. Samuelson Award, election to Academia Sinica, the Econometric Society, the American Academy of Arts and Sciences, Time Magazine’s 2012 list of the “100 most influential people in the world,” and  teaching awards from the University of Pennsylvania and MIT.

Can Financial Engineering Cure Cancer? A New Approach to Funding Biomedical Innovation. May 18, 2015

Evolutionary Foundations of Economic Behavior, Bounded Rationality, and Intelligence. May 19, 2015

Avi Wigderson, Professor of Mathematics at the Institute for Advanced Study, works in theoretical computer science and information science. He was an invited speaker at the International Congress of Mathematicians on two occasions, and was awarded the Nevanlinna Prize in 1994 and the Gödel Prize in 2009. He also gave the AMS Gibbs Lectures and received the AMS Conant Prize. Wigderson was elected to the American Academy of Arts and Sciences in 2011, and to the National Academy of Sciences in 2013.

Randomness and Pseudorandomness. May 19, 2014

Wendelin Werner (ETH Zurich) works at the interface of probability theory with complex analysis and mathematical physics. He received the Fields Medal in 2006 for his work on stochastic Loewner evolution and the geometry of two-dimensional Brownian motion. His other awards include the Fermat Prize, the Loève Prize, and SIAM’s George Pólya Prize, shared with his collaborators Gregory Lawler and Oded Schramm. He became a member of the French Academy of Sciences in 2008.

Walter Kohn made major contributions to the physics of semiconductors, superconductivity, surface physics and catalysis. He was the founding director of the Institute of Theoretical Physics at the University of California in Santa Barbara, and received numerous awards including the Niels Bohr/Unesco Gold Medal, the United States National Medal of Science and the Richard Prange Prize. His role in creating Density Functional Theory, the most widely used theory of the electronic structure of matter, earned him the Nobel Prize in Chemistry in 1998.

A World Predominately Powered by Solar and Wind Energy? May 29, 2012

Electronic Structure of Matter: Wave Functions and Density Functionals. May 30, 2012

A Physicist’s Approach to Macular Degeneration. May 31, 2012