Anna Mazzucato is a professor in the Department of Mathematics at Penn State, working on fluid dynamics. 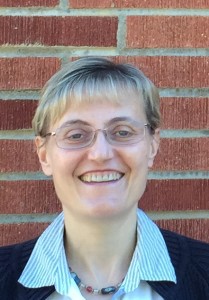 How did you come to be a mathematician?

Well, I first chose to be a physicist.  Through all my education, up through my bachelor’s degree, I wanted to be a physicist, or more precisely a theoretical physicist, so there was already a lot of math in it.  And when I went to college — in Italy at the time the degree was equivalent to a master’s degree in the US — I saw the kind of really advanced mathematics you normally see in the US in the first or second year of a PhD program.  And I realized that I liked the math maybe more than the physics.  While I want to work on problems that have physical applications, I enjoy the rigor and the predictive power of mathematics.

My undergraduate advisor suggested that I switch to mathematics for my PhD, and that the US would be a great place to do that because an American PhD program tends to be more comprehensive, whereas PhD programs in Europe tend to be shorter and more to the point and it’s harder to switch areas.  So that’s what I did.  I went to UNC Chapel Hill to get my PhD, planning to work on quantum cohomology.  But then I found out I liked analysis better.

In some sense I’m still doing physics.  Even though I’m doing mathematics, the motivation comes from physical phenomena, where there are experiments and so on.  In contrast to that, even though my undergraduate thesis was in physics, it was on topological field theory, where there aren’t (yet) experiments.

Working in fluids, in turbulence, we really don’t know a lot of things, but there are many experiments you can do.  And the experiments keep you honest, even as a mathematician.  A theorem is right or wrong, but the questions you ask are relevant or not based on the physical reality.

What problems are you working on now?

The mathematics of turbulence is complicated in that what we can understand analytically is only a toy model of the real phenomenon.  Sometimes this can be frustrating when you talk to experimentalists, because you realize that what they really need from us is so far removed from what we can actually prove.  That doesn’t mean there isn’t value in what we can do rigorously, because that can provide good benchmarks for numerical codes or even simplified experiments.

I have some work related to rigorously justifying some of the cascades from properties of the equations.  For instance, I’ve studied 2D turbulence, where the equivalent of the forward energy for the cascade is called the enstrophy. It is the square integral of vorticity, you can think of it as the energy associated to swirls in the flow.

It turns out that there are physical situations where 2D turbulence is important, even though it is hard to realize 2D turbulence directly in a physical experiment such as a thin film.  For example, in geophysics, the large scale structures resemble, because of strong stratification and strong rotation, what you find in numerical simulations of 2D turbulence.

You came to IPAM for a one-week workshop many years ago in 2001, Oscillatory integrals and dispersive equations, and now you are back for a long program, Mathematics of Turbulence.  How were these two programs similar or different?

The two programs are completely different!  The old program was really pure mathematics, more closely related to the subject of my thesis on harmonic and microlocal analysis, using it to study fluid equations.  Those methods are suited for things like studying wave equation problems, scattering, and semi-classical analysis.  This program is much more applied.

I think that’s a strength of IPAM.  There’s a strong and very valuable attempt to bring together pure and applied math by having them talk.  It’s easy to say it, and other institutes have pure and applied programs, but the idea here is to really have the two sides talk.  I’ve learned a lot here about what the engineers know, problems like wall-bounded turbulence, where you have turbulence together with boundary layers.  They know a lot!  It is mostly asymptotics or numerics, but it’s important to know what’s observed and it’s important to know what are the right questions, whether or not we [mathematicians] can answer them right now.  The talks in between the workshop have been quite instructive in this respect, as speakers often had time to delve into the details and there was more time in between talks to ask follow-up questions.

These problems are so complex that you really need all sorts of tools, from experiments, to numerical simulations, to asymptotics — you need all of that.  And even in my recent work on boundary layers, which is a more applied problem, I have used techniques from microlocal analysis that I studied for more pure problems.  So often, progress in mathematics comes from connecting areas that are seemingly unrelated.  A program like this is valuable because you have people who have come from so many different backgrounds to work together on the same thing.