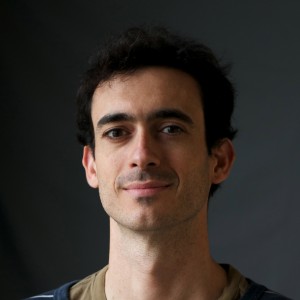 Raanan Schul is a mathematician at SUNY Stony Brook.  He has attended several IPAM programs, including Multiscale geometry and analysis in high dimensions and Interactions between analysis and geometry.

I am a mathematician.  I work in the field of geometric measure theory, and harmonic analysis.  Geometric function theory, and non-smooth analysis are also good terms to describe my interests.

What program first drew you to IPAM?

My PhD thesis was a theorem characterizing subsets of finite length curves in a Hilbert space. This characterization was done using a geometric analogue of the Littlewood-Paley square function, generalizing known results for finite dimensional Euclidean spaces.  My advisor, Peter W. Jones, was organizing the program Multiscale geometry and analysis in high dimensions at IPAM when I was in my last year of graduate school, and I came with him.  I was a pretty good fit for the subject, so he brought me along for the semester.

You have been to several IPAM programs in the past.  What keeps you coming back?

There are two opposite answers to this that both feel correct.  The first answer is that every time I come to IPAM, I end up meeting some new people who do interesting things.   This probably stems from the combinations of subjects that each program has, which gets me to be in the same workshop as people I would not normally meet.  The second answer is that IPAM is a place where I meet a lot of people I already know and enjoy talking to.  Last time I was there, in spring 2013, I saw almost everybody that I talk math with, as well as some new people.  Of course, people from the first answer then move on to be part of the second answer later on.

How have IPAM programs helped you in your research?

My first visit was in fall 2004.  It happened with excellent timing: I had a draft of what was going to  be my PhD thesis written, and I felt I had the time too look around and see what other people were doing.  This naturally suggested some directions for future research.  It also allowed me to get some sense about the way people in a few other fields tackle their problems.  I met quite a few people from a variety of fields.  I  shared a house with Mauro Maggioni and Martin J. Mohlenkamp,  two applied mathematicians.   I  ended  up collaborating with Mauro Maggioni, and today, 9 year later, I still discuss work with him quite often.    Peter Jones, Mauro Maggioni, and myself wrote two papers that were received quite well by several communities, and work on them started at IPAM that semester.

In that program I met many people who are directly in my mathematical neck of the woods.  But perhaps most importantly, I met John Garnett and Terry Tao;  I applied for an NSF postdoc with them, and ended up spending the next 4 years at UCLA. I am sure that I got acquainted with more people in that one semester than I had in the rest of my career.

I think the answer is a paper I wrote with Jonas Azzam called Hard-Sard.  This is a paper that combines many ideas into two main theorems.  There is one idea that we use there, that we have used in two other places already, and this idea can be described quite well in words, so I’ll tell you about it.  (A disclaimer: this idea is part of a progression of ideas, which appeared in several forms, dating back at least 30 years.)

There is a sense in which a wavelet coefficient is a coarse approximation of a derivative of a function.  A way in which this is used is to take a function mapping Rn to Rk, consider its derivative, and look at wavelet coefficients of the derivative, i.e., consider an approximate version of the curvature of the function.  For every location and scale one gets a number (the wavelet coefficient) which measures the how non affine the function is. If, for example, the derivative was an L2 function, then you get that these numbers are square summable. If your function maps from Rn to a metric space, this doesn’t quite make sense any more because we don’t know what it means to take a derivative or what it means for the function to be affine.  It turns out that one can make sense of a linear approximation to how the function changes the metric.  This is done by approximating the pullback of the metric on the image with a seminorm on the domain, Rn, and measuring the error of that approximation.  That turns out to be a good substitute for the wavelet coefficients of the derivative, and it enjoys some similar quantitative properties.  Alas, at this time we cannot yet prove all the properties which we believe to be true!  The upshot is that this idea can be used to transfer some techniques that are used in the setting of functions taking Rn to Rd, to the setting of functions taking Rn to a general metric space.