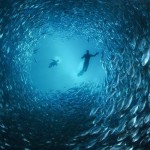 Mean Field Games (MFGs) are games with a very large number of agents interacting in a mean field manner in such a way that each agent has a very small impact on the outcome. As a result, the game can be analyzed in the limit of an infinite number of agents. This subject, introduced independently by Lasry & Lions and by Huang, Caines & Malhame in 2006, is widely recognized as an important approach to study large systems such as financial markets, crowd dynamics, communications networks, power systems or war games. At the same time, both the theory and numerical computations of mean field game equilibria remain significant challenges.

There are currently two approaches to the formulation and the analysis of MFGs. The first is based on the solution of a coupled system of highly nonlinear PDEs (Hamilton-Jacobi-Bellman and Fokker-Planck). The second approach is probabilistic: it relies on the solution of a forward-backward stochastic differential system of equations of McKean-Vlasov type.

This workshop will bring together experts in the field and researchers in other fields with an interest in Mean Field Games. It will cover the formulation and theory of MFGs, generalizations including additional effects, numerical methods and applications of MFGs.